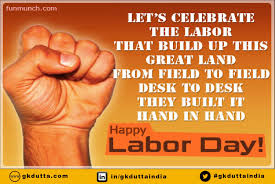 Yesterday, the newspapers carried an item datelined Delhi-‘Five ragpickers, including three children, died allegedly due to suffocation while looking for scrap inside an underground drain in southwest Delhi’s Chhawala on Saturday’. According to the report, the children were tempted into the drain as they found some empty bottles inside it. According to some estimates, every year more than 22000 people die in the country doing various kinds of sanitation work. Deaths due to industrial hazards, poor working condition induced diseases and such other things could also be running into thousands. It is only a matter of guess how many suffer illness, grave injuries and death in the country where close to 92 percent of the people are employed in the informal/ unorganised sector.

The haze and mist of ‘liberalised’ and ‘globalised’ economy does not allow us to see the condition of the people who work outside the relative comfort zone of the organised sector.  Sometimes, though, one may feel guilty of an unknown crime as happened with me last year. A friend of mine fumed on the Facebook that government servants are being fattened with the recommendations of the 7th pay commission while the majority of people find it hard to get an honourable job befitting their qualification. Though I defended myself and told him to look for the real reasons for the misery of the people, there was a slight sense of guilt in my heart. I get to hear stories from my close relatives who work in private companies how they are made to work for an average of 10 hours or more. How they are denied even the regular leave once a week. How they have to struggle to get leave to maintain their social relations or attend to an ailing mother or go to a family function which are essential parts of a human life with dignity. On this May Day, rather than looking at the macro picture, the reality at far away places, let me turn my gaze nearby, to the wokr place where we work and earn a comfortable salary being part of the government, organised sector.

In the name of end to license- permit raj we have moved to the other extreme of totally unregulated private sector. The first victims of this are again the labour class and others who work under a system heavily loaded in favour of the owner of the firm, company, enterprise big or small.

Right from the cleaners and drivers to the consultants at the top, people are being hired on a contract basis. At the lowest level, persons doing works like cleaning of the offices, peons and clerical staff, stenos, Data Entry Operators are mostly being hired through agencies which ‘supplies’ them at the ‘competitive’, lowest bidding rate. Though some provisions may exist on paper to safeguard labour laws like EPF etc., hardly any organisation cares to see if these are being properly implemented or not. Quite often, the agency supplying these workers charge a hefty cut from their meagre salaries which are mostly in the range of 10,000 to 15,000 rupees per month. The agency ‘service charge’ could be anything between Rs. 1000 to 2500. Unfortunately, this is happening almost all across the government sector.  The manpower supply business or placement agency work is quite a lucrative business with government sector being its major client.

Even at a higher level of contractual employees (technically they are not called employees but ‘engagees’  or similar  fancy words to avoid getting caught in the legal issue) such as Editors or Reporters in the context of government news organisations, they are not entitled to any social security benefits like EPF, Health Insurance etc. Of course, there is a rule that exempts deduction of EPF contribution for people getting salary below a certain level but even other routine benefits are not getting to these people. Many of these people have been working for more than a decade without any substantial or real change in their working condition. In a welcome move, the government recently allowed maternity leave benefits to the contractual employees. However, most of the other non-regular employees are still out of the purview of the maternity leave benefits.

In a judgement last year, Supreme Court has said that the principle of equal pay for equal work would be applicable to all employees, including temporary ones. In its order the court said  that the these employees should be given wages, at par with the minimum of the pay-scale of regularly engaged government employees, holding the same post. I don’t know how this would be implemented in the government as the entire economic basis of hiring contractual or casual employees would be defeated if they are to be paid the same wages.

The monetary part of the problem may not be so big. It is the attitude of indifference to these issues within the governmental set up which is the real culprit. Here are a few suggestions which could be adopted in the government offices to improve the working condition of the majority of the people now working as non-regular employees in various categories –

On this May Day, it would be a good beginning if we turn our gaze nearer and make government offices more just, equitable and happier places to work. It sure will reflect in higher productivity and improved performance.

If 8 percent closes its eye to the condition of the 92 percent, the din and noise and cry and shout could soon become unbearable for all of us.